To celebrate my new job as an Happiness Engineer at Automattic’s, I replaced my two iMacs with a brand new MacBook Pro.
After working exclusively on Apple laptops since 1994, one year ago I switched to the iMac. To two iMacs exactly (27″, Core i7, 8GB Ram and 1TB HDD each), one at home and one at my office.
I kept both synchronized through me.com and everything worked quite well as long as, when on the move, an iPad was enough to check my emails.
Now, things have changed, and when I travel I need a real laptop again. I went to Vienna to meet my teammates for a week with a MacBook Air, and once back it was obvious to me that this wasn’t a good solution.
First of all keeping three Macs synch’ed and up to date was becoming a time eater. Then, as much as I love the Air, I really missed a bigger screen and some extra power.
I was able to return the MacBook Air, but replacing it with a MacBook Pro would not have solved the first issue, and looked like wasting money to me, as I will probably only travel a few weeks per year.
That’s when Apple announced the new line of MacBook Pro Thunderbolt, and I decided to simplify my gear without giving up the comfort of the 27″ screens.
So, I ordered the best 15″ MBPro, 1680×1050 display, 8GB RAM, 2.3 GHz Core i7 and a 512GB SSD, and decided to sell the two iMacs.
Here is my home-office set-up now: 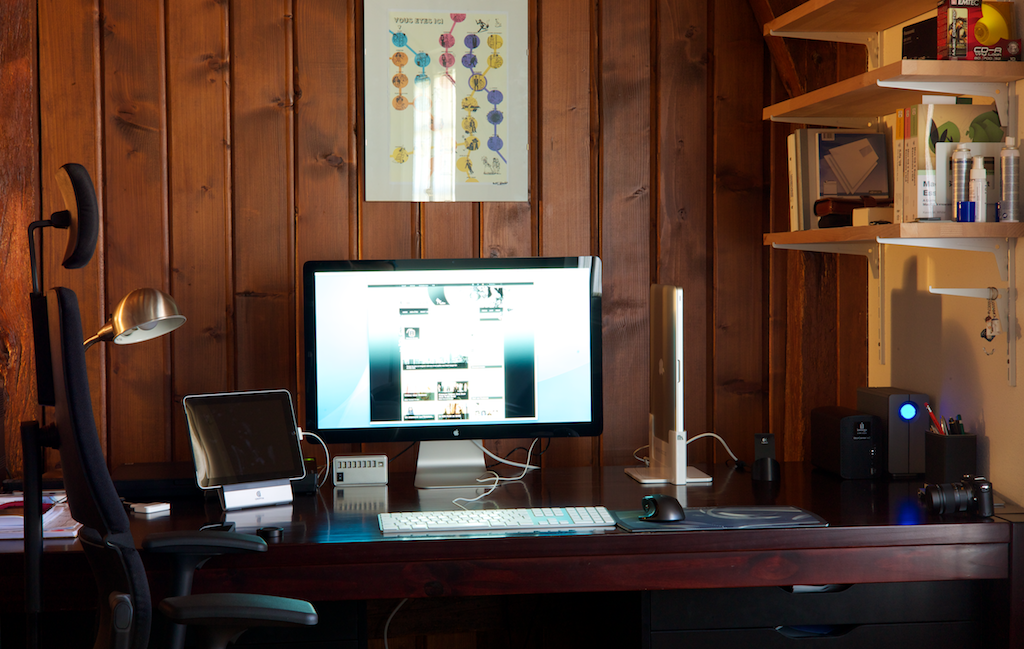 From left to right: the chair that keeps my back safe while sitting for long hours, the iPad, a 27″ Apple Display with a 16 ports USB hub, the MacBook Pro in his dock (Henge Docks), and then the HDDs. The first one is a NAS on which I store my music, video and photos, so I can access them from anywhere without filling the internal SSD, the second one is my local CrashPlan backup (a remote backup is also kept on CrashPlan servers). Both are RAID 1 made of two disks each.
A similar setup waits for me at my office, the only differences being on the backup side of things (I have two 1TB HDDs in RAID 1 there used by Time Machine, did I mention I am a bit paranoid when it comes to backups?)

One response to “New home-office set-up”